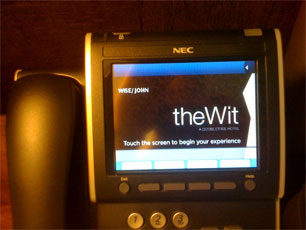 I’ve just returned from a truly enjoyable visit with an NEC customer, theWit Hotel in Chicago, for a video shoot that promises to be both engaging and enlightening from a hospitality IT and communications perspective.  TheWit, which opened earlier this summer, is a stunning, brand new property in the heart of Chicago ’s vibrant theater district.

During our stay, we interviewed two key executives: Chief Technology Officer Darrin Pinkham, and Chief Branding Officer Lou Carrier.   As you’ll hear them say in the video, theWit is more experience than hotel.  One of the things that struck me during the stay was not only how engaging the staff was there (there’s a smiling face at every corner), but their use of technology to enhance and speed guest service.

Here’s a quick example.  On the last day, we decided to shoot some B-roll video footage out at the Chicago Navy Pier to capture the city’s awesome skyline.  I used the touch-screen display on my room’s NEC UNIVERGE DT750 phone to request our rental car for pickup at the valet stand.  The screen said to expect a 15-minute delay, but when we arrived downstairs 5 minutes after placing the order, the bellman (not the valet attendant) knew my valet ticket number and knew the status of the order.  The valet attendant was already retrieving the car and beat the 15-minute goal by a long shot.

It turns out, it was the integration between NEC’s UNIVERGE SV8500 communications server, an XML application from NTT DOCOMO InterTouch (formerly Percipia) and M-Tech’s HOTSOS service optimization system that enabled such speedy and helpful service.  This integration enables a host of other options right from the DT750’s touch screen in every guest room.   There’s much more to showcase from theWit, so keep an eye out for our video case study in the coming weeks.