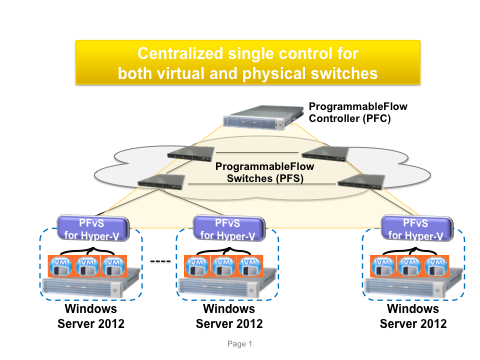 ProgrammableFlow has been selected as a finalist for The Microsoft Best of TechEd (BOTE) North America Awards, produced by Windows IT Pro, SQL Server Pro, SharePoint Pro and Dev Pro, which recognizes innovative products and services being showcased this week in Orlando at Microsoft TechEd.  More than 300 products were nominated with finalists selected in 15 categories.  ProgrammableFlow is a finalist in the Networking category.

All registered attendees can vote for ProgrammableFlow to win by visiting the Best of TechEd webpage before 2 p.m. Eastern on Wednesday, June 13.

As reported in a previous press release, we demonstrated a ProgrammableFlow Virtual Switch for Windows Server 2012 at Microsoft BUILD last fall.  We are continuing to march forward, in lock-step with Microsoft, leveraging the Hyper-V Extensible Switch application programming interface (API) to deliver the exciting benefits of OpenFlow and Software Defined Networking (SDN) to Windows Server 2012 customers.

With ProgrammableFlow, the entire network can be configured and monitored and controlled from a central point, including visualizing end-to-end network flows and drag and drop configuration and network design.  Network performance is also optimized by network level load balancing across multiple paths for more available bandwidth and faster network response.

ProgrammableFlow leverages OpenFlow to separate the control plane from the data plane, which allows for network-wide virtualization and programming of the network.  With ProgrammableFlow, delivery of network services and benefits are dramatically accelerated.  No longer will the network be a bottleneck for the progress of the business.

This week (June 11-14) we are demonstrating ProgrammableFlow with Hyper-V again in the Microsoft Partner Pavilion (#18) at TechEd 2012 in Orlando.  Our own Su-hun Yun will be taking the stage at 1:30 on Wednesday, June 13, during the Tech Session led by Microsoft Bob Combs in a session called “Get Hands-on with the New Hyper-V Extensible Switch in Windows Server 2012”.  He will repeat the stage demo of ProgrammableFlow with Windows Server 2012 at TechEd in Europe June 29.  And we recently completed a short video on the capabilities, which you can access on the NEC YouTube channel here.  Stop by at TechEd and view this exciting new capability live if you are there!