Some of you may have heard of the new SDN Interoperability Lab at Indiana University, a key initiative of the Indiana Center for Network Translational Research and Education (InCNTRE)where they are focused on training, education, research and collaboration to encourage the adoption of OpenFlow and SDN technologies.   NEC is proud to be a charter member of InCNTRE, helping to support the unit financially and with test hardware and software from our ProgrammableFlow® network suite.   InCNTRE last week hosted the second semi-annual PlugFest, sponsored by the Open Networking Foundation (ONF).

PlugFest participants noted that NEC was the most interoperable vender and with our technology and engineers presented strong leadership during the event. Use cases included:

1)     Setting up OpenFlow network flows for L2 and L3 switching

2)     Failure and recovery of OpenFlow flows, where the controller automatically re-routes traffic after detection of a switch fault

4)     Virtual machine live migration, where the Controller relearns the new position of the migrated VM and automatically maps it to the specified virtual network without any additional configurations. 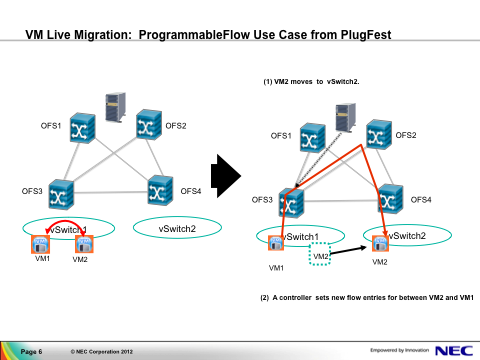 OpenFlow Controllers have expanded from the announcement of the ProgrammableFlow Network Suite in May, 2011, the first commercially available OpenFlow controller.  Included at PlugFest was:  NEC, HP, BigSwitch, Huawei, NTT-Data, and NTT-Communications (MCL) and the NOX open-source based controller from Indiana University, OESS.

Our ProgrammableFlow switches successfully operated behind all OpenFlow controllers present.  Also included in the PlugFest were OpenFlow Testing devices from Ixia and Spirent, which simulated the environments, and OpenFlow Configuration vendors Infoblox and Luxsoft.

PlugFest was great event for all OpenFlow venders invited to participate.  There are always different understandings of standards and some vendors may implement in slightly different ways.  For the benefit of OpenFlow customers everywhere, now we have tested step-by-step, command-by- command, packet-by-packet.

There was heated discussions about which implementation is correct or not, and what is the most exciting part of testing interoperability. Thanks go out for the excellent coordination and fair independent judgments provided by our third-party hosts, Indiana University’s staff. It was a great learning experience for all the vendors participating, and a number of issues were encountered and addressed.

All and all the week was a bit tiring, but most valuable.  There is nothing more satisfying than the  “Ping” successes after several hours debugging!