Learn why pulling the plug doesn’t stop streaming with the Wowza ClearCaster appliance.

Recently, I was supporting our CEO, Dave Stubenvoll, by providing an onsite customer demonstration of the Wowza ClearCaster™ appliance. Suddenly, right in the middle of our session, Dave intentionally pulled the 120-volt power cord from the unit.

While maintaining composure, on the inside, I was freaking out! In my mind, I screamed, “Dave, why would you do that?!”

What I didn’t yet realize was that the Wowza ClearCaster device is designed to automatically resume streaming when power is restored. This incident, while terrifying, actually showcased the resiliency of our ClearCaster hardware, and how it can consistently recover from a power outage.

In most instances, removing power—or disrupting a physical server in any capacity—is a very bad idea. Candidly, even having witnessed the ability of our branded hardware to recover from loss of power, the idea of showing that off in an on-site demo makes me a little nervous. Most of us in the industry shy away from “messing around” with a server once it’s up and running.

My friend, Richie Murray with Bridge Digital, would certainly disagree with me. Over a period of months, I had been running into Richie at various industry events, where he kept trying to get me excited me about a “fault-tolerant server” that he was convinced would be perfect for streaming. He claimed to have this device that would “keep on going” when any primary component became compromised during operation.

It sounded like a great idea, but I wasn’t sold. Prior to working with ClearCaster, I’ve worked with people all over the world, in every aspect of the industry, and have never encountered a situation where a media server could be compromised, yet “keep on going.”

Video streaming is complex and resource-intensive. The thought of a server maintaining a transcoding and packaging workflow—to a maximum scale—while losing a hard disk, power supply or motherboard component sounded very far-fetched to me. But then again, Richie is a stand-up guy, and I realized he may be onto something.

I agreed to meet with Richie and his team to help them set up a test server. We established a simple transcoding workflow, using Wowza Streaming Engine™ media server software, and commenced testing the fault-tolerance of their device.

The NEC Express 5800 fault-tolerant server is a 2RU device that is essentially two servers in one box. Every component of the device is perfectly replicated by a accompanying, redundant spare, resulting in two functioning, logical sections that operate as one. Interestingly, there’s no advanced configuration required, since it looks and feels like a single server—with the key difference that you can physically remove half of the server hardware while your video streaming workflow is running, and it doesn’t skip a beat.

Impressed, but not convinced, I decided to up up the ante. I thought perhaps we got lucky with the fault-tolerant server handing a simple single-stream workflow; what will it do under a “real” video-streaming workload?

Requesting time on the server, I scheduled another session to configure several internal source streams using the Wowza StreamPublisher. I also made sure the central processing unit (CPU), network and memory were all up to around 80 percent utilization, tasked with recording (MP4 and nDVR), heavy transcoding, and HTTP packaging into HLS and DASH. With the server under heavy load, I called Richie (snickering to myself) and asked him to compromise the device.

It didn’t skip a beat.

I don’t know how they did it, but NEC has built a device that will, in my opinion, function as an optimal solution to bolster an on-premise media server deployment where a single point of failure is a risk. Having helped countless Wowza users design redundant workflows, this architecture is perfect for a situation when multiple servers are not practical, but where a redundant server is required.

What I like even more about this is the simplicity. The setup is exactly the same as a single server, but again, with the fault-tolerance engineered into the hardware itself.

If you’re considering an on-premise deployment; have concern over a single-server point of failure; and don’t have the experience, time or resources to build out an elaborate failover workflow, consider the NEC solution, available from a Bridge Digital. Installing Wowza Streaming Engine was simple, and the outcome was exactly as expected.

With plenty of resources for a standard streaming deployment, this is a fantastic hardware solution. Take it from me: I tried really hard to break it, using all the Wowza tricks in the book, and I failed miserably. Can’t ask for much more than that!

Tim Dougherty is the Director of Solution Engineering at Wowza Media Systems, based in Golden, Colo. A user technology expert, with more than 20 years of experience in IT, network administration, video production, and project/program management, Tim serves Wowza by helping customers visualize and integrate effective streaming media solutions.

Free Strategic Consultation
Let us assist you with your current business needs!

Fill out the form today and we will get back with you. 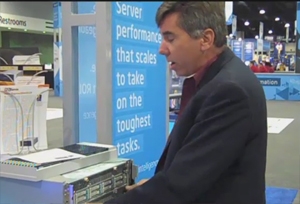 It was great to see so many excited TechED attendees this year at Microsoft  TechED in Atlanta. Microsoft always has a great event attended by many people interested in learning  more about Microsoft and products for the Microsoft envrioment.  NEC was fortunate to be in a booth with Intel. Intel provides the Westmere-EP and Westmere-EX Xeon processors for the NEC servers that were in the booth.  The NEC servers have been designed with Fault Tolerant and Scalable, High Availability capabilities for the mission critical enterprise space.  The NEC servers provide consistent reliability within the ecosystem of Microsoft enterprise class products such as Windows Server, SQL Server and Hyper-V.
Mike Mitsch was in attendance and provided the portfolio and product overviews that were captured on video.  I was also in attendance and was able to provide interactive demonstrations and have discussions with hundreds of attendees regarding their need for Fault Tolerant and High availability systems.  At NEC, we are excited to work, with Intel and Microsoft, to provide better solutions for the Intel and Microsoft ecosystem.