This story comes via the Best Mobile Contracts blog site…it’s a good one! 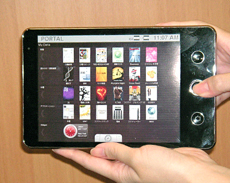 Before you can even say Google Chrome, NEC has already announced that it will be releasing a Google Tablet in Japan.

Yes, just a few days after the Apple iPad has been confirmed, it appears that Google is right there matching their main mobile gadget competitor in every step of the way. With the HTC Google Nexus One already stealing most of the spotlight, it was a nice change of pace to see some non-Google news when Apple announced that they will finally be unleashing their much anticipated tablet. But just when the diversion was sinking in, NEC comes out with their tablet gizmo.

NEC Biglobe’s “Cloud Device” is a pretty little gadget that gives you a 7 inch LCD touch screen, on a device that is 7.8 x 4.7 x .5 in. large, weighs .8lbs and supports WiFi.

There is a lot of promise in the device and it is estimated that the NEC device will be using the Android OS (not Chrome) and will have a price tag of somewhere around $275 US.

Since the main purpose of the tablets is for casual browsing, it is expected that the hardware on this gadget will be somewhat close to the specs of the iPad , if not a little lower. The device is confirmed to support 3G/WiMax in Japan and will be compatible with microSD cards for expandable memory. According to the image screenshots the name of the product is WebStation and it will serve as can serve as a desktop clock or calendar when not in use.