NEC was host to six great partners Tuesday, May 8, as we demoed live a ground-breaking Interoperable OpenFlow Fabric featuring Brocade, Extreme Networks, IBM System Networking, Intel, Microsoft and Radware, all controlled by Best of Interop Grand Prize winner, NEC ProgrammableFlow Controller PF6800 v2.  Press and analysts were invited to our first demo of the morning, where we were joined by knowledgeable representatives from each of the partners.

Kicking off the day and welcoming our guests was our own Don Clark, soon joined by Samrat Ganguly, Chief Network Architect for ProgrammableFlow.  Samrat   demonstrated the functioning network, showcased the contributions of all six companies in a single, programmable network.  It was the first time an interoperable OpenFlow fabric has been demonstrated.  This new ecosystem is a viable alternative to inflexible, closed and proprietary network infrastructures. 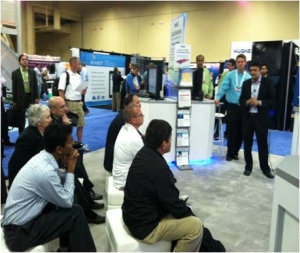 Vice President of Technology, Shehzad Merchant of Extreme Networks, talked about the benefits of an open Software Defined Network spanning enterprise infrastructure from mobility to WAN, providing break-through flexibility.  And Daniel Williams, Director of Product Marketing at Brocade described an open ecosystem that will give customers previously unknown flexibility with their hybrid switches that operate in either an OpenFlow environment or a standard L2/L3 network.

Intel’s Gary Lee, from Intel’s Switch and Router Division Product Marketing, talked of their support for Software Defined Networks, an area they believe shows great promise in the future.  And Rakesh Saha from IBM rounded the session out sharing his perspective on SDN and our ongoing collaboration with IBM System Networking.

To the delight of a standing room only crowd, NEC French Telecom customer, research scientist Christos Kolias, spoke later in the day on the company’s OpenFlow experiences to date.

We look forward to seeing you today in booth 815, our last day at Interop!