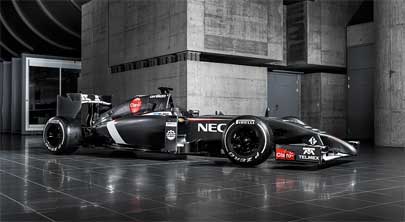 What does Unified Communications have in common with Formula One racing?

Well a lot more than you might think. There’s nothing like the combination of speed and technology—a blend that is key to success for both technologists and Formula One (F1) teams.

Speed sells, and it sells well. Speed—or lack thereof—is the main reason that many technology innovations take off. It’s also the reason why many fail. Speed is the reason why dial-up internet was replaced by DSL, horses by automobiles, and why F1 racing continues to grow in popularity year over year.

All of that is fairly obvious.

But what isn’t always obvious—is that NEC invests in speed and innovation in areas beyond IT technology.  In fact, NEC is heavily invested in F1 racing—a sport where speed and technological innovation are necessary to succeed.

NEC is a premier partner of the  Sauber F1 Team, and yesterday we hosted our annual F1 Drivers Day event at our European headquarters. It’s a fun day for NEC and is just four days before the British Grand Prix at Silverstone.

Those who attended had the opportunity to meet Sauber F1 Team driver Esteban Gutiérrez and test driver Giedo van der Garde in person. The rest of us were invited to a question and answer session through the live UNIVERGE 3C broadcast, which gave the event a truly authentic flair (we are technologists after all).

Racing technology has indeed changed a lot over time—which was evident in the pictures that Sauber brought with him of some of the original computers and equipment that has been used by the team. Sauber is one of the oldest F1 teams on the grid today—and was founded in 1970. So they’ve had a front row seat as F1 technology has grown and changed over the last 40 plus years (the picture below is an excellent example as it shows how much the steering wheel changed over the course of just one year).

With Esteban running late as a result of a British Customs snafu, Giedo took the first round of questions from the global audience. The first question was about F1 steering wheels, which to a layman looks like the lunky musclebound brother of an Xbox controller. 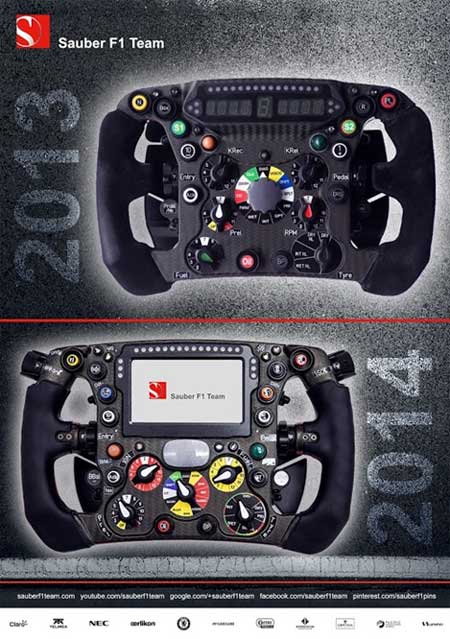 The steering wheels are incredibly complicated. The buttons and knobs do everything from controlling the radio, to managing the brake systems, shifting, clutch system, oil intake, brake fluid—and so on. The lights, and now screen, serve as warning mechanisms—letting the driver know when something has gone awry. With the car going up to 340 kilometres per hour (about 211 miles per hour) it becomes increasingly evident that making an error can be dangerous.

That’s why the drivers are given their own tech—simulators, which keeps their reflexes honed during the off season. For Giedo, the newest Sauber team driver, the simulator technology is even more important, as each car is customized to the team and the team’s drivers.

The discussion then turned to racetracks, with a viewer asking where the Silverstone track was most challenging, and which track was the most difficult overall.

Giedo memorizes each track. The real challenge, according to him, lies within the curves. Curves are the most technically difficult parts of the race for the drivers to execute. Even with the stable car, the high speed corners require serious backbone—as the changes in down force and torque make the car more difficult to handle—like an incredibly powerful dog pulling on a leash.

F1 in general requires serious backbone, which signals the part of the event where the discussion turned toward the racers themselves. It bears mentioning for those who are not fans that Formula One racing is one of the most physically demanding sports there is.

As Giedo kept talking, he named Singapore track as his toughest, both physically and mentally. “It’s basically made up of non-stop corners,” he said. Singapore is a two hour race, during which his average heart rate is 158 beats-per-minute—putting immense stress on the driver’s body. This is most evident when you compare the number to the average healthy man’s heart rate, which is typically around 60 beats-per-minute.

The physical stress of driving takes a toll on the racers, which led Giedo to discuss the difficulties of not being able to drink in the car. With so few pit stops, it can be easy to get dehydrated. Racers can lose up to 3 litres or more of fluid (about 0.8 gallons) in a two hour race—three times more than what’s required to lose concentration.  So dehydration becomes even more dangerous than usual in a sport where concentration is literally required to keep the participants alive.

The human element, as it seems, may be one of the most dangerous facets of F1 racing. In fact, the cars themselves are one of the safest, as they are engineered to be highly stable and include some of the best technology the world has to offer. But when asked by one NEC F1 fan whether or not there was a future where robots would be driving the cars, Giedo flatly said, “No,” indicating that the robots wouldn’t be able to make the quick decisions the drivers themselves have to make during every race.

As Esteban arrived and got settled, the discussion turned to fitness, as a viewer asked about exercise needed to sustain the racers’ bodies during the grueling races.

F1 racers must have immense physical resistance to heat and other stresses, as well as the ability to cope with potentially catastrophic fluid loss. In fact, experts say the loss of one per cent of body fluid is enough to cause serious lapses in concentration. And a Grand Prix driver will lose up to three and a half liters of fluid in the course of a two-hour race.

During an F1 race a driver will experience up to 5G under braking and cornering  and 3G under hard acceleration, meaning that his neck has to support up to 24 kilograms (53 pounds) during a long corner—the equivalent of having a sack of spuds slammed into the side of your head while you’re driving.

During the off season, Giedo and Esteban said they will work out about for about three hours in the morning, and two hours in the afternoon to stay in shape. During the season, the drivers have a varied schedule, so while they try to average two hours a day, it can change.

When Esteban was asked what matters most, the skills of the driver or the technology in the car, he answered very matter-of-factly, “Well the car has to be quick. But driver has to drive as quick as possible with the car that’s fast. It’s a combination.”

So there you have it. Speed and technology, paired together to make a successful F1 racer as well as the car he drives.

And as the live UNIVERGE 3C broadcast came to a close, Esteban thanked the NEC team saying that UNIVERGE 3C gave them the ability to talk to all of the NEC fans more easily. “Thanks to the technology, we don’t have to travel all over to talk to you,” he said.

Which given his issue with Customs, is probably a relief.

If You Missed the Event