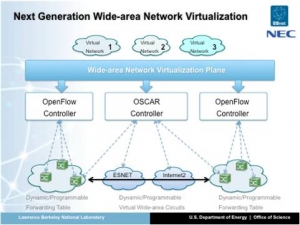 Samrat Ganguly, Senior Systems Architect, for NEC Corporation of America (NEC) paired off this week with Inder Monga from ESnetat Joint Techs 2011 in Fairbanks, Alaskato present “OpenFlow with OSCARS:  Bridging the gap between campus, data centers and the WAN.” They were demonstrating for the first time end-to-end network virtualization across both LANs and multiple WANs, with the ability to program the network via ProgrammableFlow.  This has implications for both the researchers attending Internet2 Joint Techs, and their ability to connect and collaborate all the way through their networks, as well as enterprises implementing clouds across multiple data center sites in delivering IT services rapidly to their lines of business.

If you aren’t familiar with ESnet, it stands for the Energy Sciences Network, which is funded by the U.S. Department of Energy Office of Science.  They provide high bandwidth connections that link scientists at national laboratories, universities and other research institutions, as they work together to solve the world’s biggest scientific problems.  Because of our OpenFlow expertise and capabilities, and dating back to NEC’s initial involvement on the Clean Slateprogram at Stanford University, we were invited to work with ESnet on this exciting virtualization and automation implementation.

In my experience, enterprise customers need to reduce the time required for network deployment, reduce operational complexity, and enable network level automation in supporting diverse application requirements.  Now, with the open source toolkit supplied by ESnet’s On-Demand Secure Circuits and Advance Reservation System (OSCARS), and ProgrammableFlow, together they will provide the automation and secure network service provisioning that scientists and industry need to maximize the full potential of cloud computing.

Networking researchers and administrators can access OpenFlow’s capabilities on ESnet’s Advanced Networking Initiative (ANI) testbed, using NEC ProgrammableFlow switches to test out advanced concepts in networking.  More information can be found at https://sites.google.com/a/lbl.gov/ani-testbed.   The media advisory about Ganguly’s presentation is at www.necam.com/pflow/press.ctm.

And for those of you who missed our press release announcing ProgrammableFlowat Interop, learn more about our award-winning Network platform based on OpenFlow at NEC website, or call today 866-632-3226 to set up at test of ProgrammableFlow at your own installation.