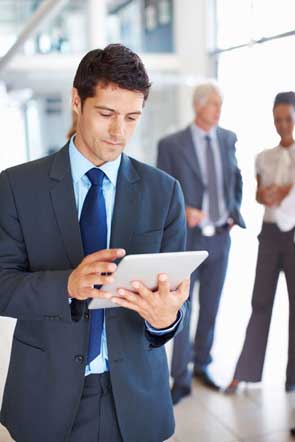 Unified Communications (UC) has enjoyed a steady, if not slow, broad acceptance as technology users begin to accept the efficiency and effectiveness of new market-driven apps. With employee mobility becoming a priority, an office for some does not include the traditional four walls, and as a result, smartphones and tablets have caused a rush for the door.

Collaboration and efficiency were cited as the driving forces for the IT professionals’ decision to supply UC systems. To further support the growing partnership between UC and mobility,InformationWeek cites a survey in which 87 percent of 300 respondents claim to expect smartphone use to grow in the field of sales. In this same survey, only 8 percent reported plans to purchase desktops.

These reports come as no surprise, however, when all the benefits, offerings and advantages of both a laptop and desktop can now be found on your choice of a smartphone, tablet, or other mobile handheld device, and easily at that. The mobilization of communication has unleashed a genuine freedom in business communications, where users demand the same capabilities on smartphones and other handhelds as they utilize on desktops and laptops. With the increase in workforce mobility, these users’ demands are being met.

Mobile UC initially evolved from the concept of fixed/mobile convergence (FMC). FMC integrated mobile network services, and resulted in the voice market evolution into UC systems where voice is only one of several communication modes to be integrated. This methodology ultimately replaced FMC.

Despite all of the benefits, adoption of UC is still slow, and according to Information Week, it is due to a lack of user engagement– to limited IT infrastructure– to lack of enough funds to implement the adoption. The wait for the evolution of security and management is over, and with this evolution comes to the necessary improvements for these systems to flow into a natural, trusted cultural adoption. For unification within this media to truly occur, this evolution was absolutely necessary.
Now that budgets are finally easing and seeing some room to “bend,” it’s time to consider devoting time and energy to mixing mobile devices in the UC fold. If productivity is your goal, and expanded profit margins are your intended accomplishment, the only way to deliver the full benefit of your endeavor is to liberate your immediate users with mobile unified communication. The tables have turned; earlier efforts to mobilize UC failed to gain popularity, now mobilization is almost essential. Are you ready to make your move?