NEC Corporation of America recently announced the general availability in North America of the InfoFrame Elastic Relational Store, a high-performance database built for high availability and flexible scalability.  IERS is a key value store  that provides high-speed transaction processing and SQL (structured query language) capabilities through a JDBC/ODBC interface.  This means that IERS combines a SQL interface with advantages of the  NoSQL databases.

How important is SQL? The Relational DBMS market is built on SQL, with Oracle, MySQL, and Microsoft SQL Server being by far the most implemented RDBMSs. Every computer science major learns SQL; in fact, just about anyone who has anything to do with data learns SQL.  Since the 1980s, SQL has been the standard for manipulating data.

In recent years, we’ve seen the growth in popularity of NoSQL databases.  In many ways, the Internet drove the need for non-relational databases as content management systems outgrew their RDBMS roots and required unprecedented scalability.  NoSQL databases provide virtually infinite scalability as they can grow without bringing the entire cluster down or pushing a complete re-partitioning across all nodes.  They provide fault tolerance and high availability by partitioning and replicating data across nodes and dynamically repairing these nodes as necessary.

This is all well and good, but many NoSQL databases fall short of their RDBMS cousins in that they aren’t built to rapidly process transactions, perform error checking, and maintain data integrity.  Many don’t support SQL, the language on which the vast majority of database architects and users rely.

IERS is designed to meet the transactional needs of mission critical databases.  IERS uses a three-layer architecture where each layer can scale outor independently without downtime and also runs in-memory processing and replication for high performanceand high availability. IERS contains powerful security functions such as user authentication and access privileges comparable to those found in RDBMSs.  The system can be accessed via a SQL interface which makes application development and data migration easier for enterprises than NoSQL systems. 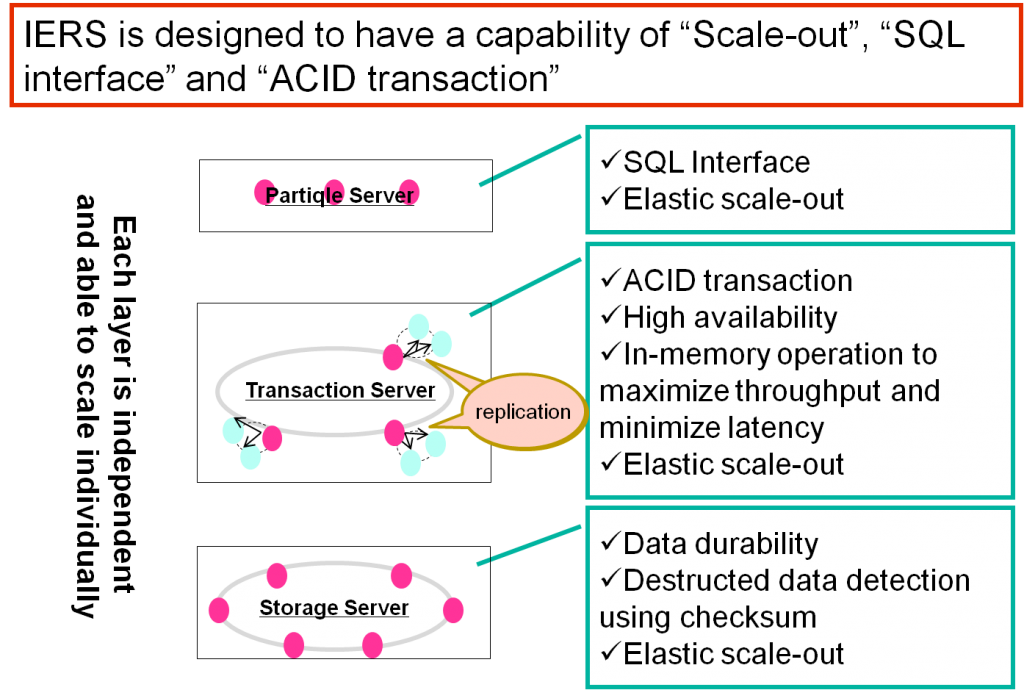 There are many advantages to using IERS.  Look for future blog postings on NECtoday.com and TopTechDog.com for discussions on  the technical advantages of IERS, different use cases for IERS, case studies about IERS and more information about how NewSQL can best be put to use in your environment.