The cloud-based communications services market is one of the fastest growing segments in the quickly expanding Unified Communications market. 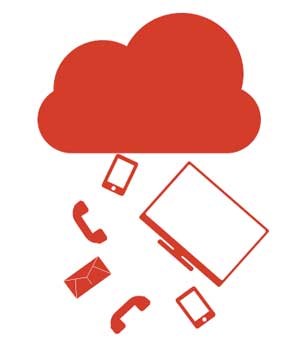 Even with the advantages UCaaS offers, there remain some concerns about adopting these solutions. A recent Spiceworks survey of 267 IT pros in North America (11% of whom have already implemented UCaaS in their organization) points to two main concerns about hosted solutions: availability and performance.

By educating IT pros on UCaaS adoption trends and advantages, we hope to offer a closer look at the burgeoning UCaaS market.

Early technology adopters tend to buy and try out new hardware and software, and versions of existing programs sooner than most of their peers. According to Everett Rogers, author of the Diffusion of Innovations (DoI) theory and book, early adopters make roughly 14% of consumers.

And while early adopters are eager to explore new options like UCaaS, they are not the only ones worth watching. According to Rogers, there is a small minority of early adopters called innovators. Only one person out of 40 is of this type. Innovators are the people most likely to conceive and develop new methodologies and technologies, and who often end up running large IT corporations or founding new ones.

As the Spiceworks research shows, they are the ones adopting UCaaS.

IT Pros Responding to UCaaS

Among IT pros responding to the Spiceworks survey, 11% had adopted UCaaS. However, another 12% indicated they are planning to adopt it in the next year, which will more than double the number of people using UCaaS today.

This projected growth tracks consistently with the expectations of UCaaS market growth reported in 2013 by researchers at MarketsandMarkets. Their report on UCaaS projects that the global market will grow from $2.52 billion in 2013 to $7.62 billion by 2018, at an estimated CAGR of 24.8%.

Some suggest that developing confidence in hosted solutions in general is the impetus for the projected dramatic increase in adoption. Irwin Lazar, of Nemertes Research, has pointed out, “…more than 90% of companies now use software as a service (SaaS) applications.”

UCaaS’ potential to create uninterrupted communications across multiple devices and methods appeal to companies whose employees are increasingly seeking seamless 24/7 access to communications. According to Denise Culver, research analyst and author of a recent Heavy Reading Insider report on UCaaS, “As UCaaS continues to be viewed from the lens of a solution that cuts the landline cord and eradicates the need for a traditional PBX, it will be looked at as a business enabler, rather than a simple phone system.”

According to the Synergy Research Group, UCaaS subscribers will grow an average of 76 percent annually over the next five years. SMBs are expected to be a large part of that group.

Are you excited by the opportunities UCaaS presents to the communications market?

Check out the Reducing UC Costs and Increasing Business Performance whitepaper to take a deeper dive into the advantages of UCaaS, market drivers, concerns, and what to look for in a provider.